The Evolution of Kalimbas and Channeling How They Might Have Sounded. 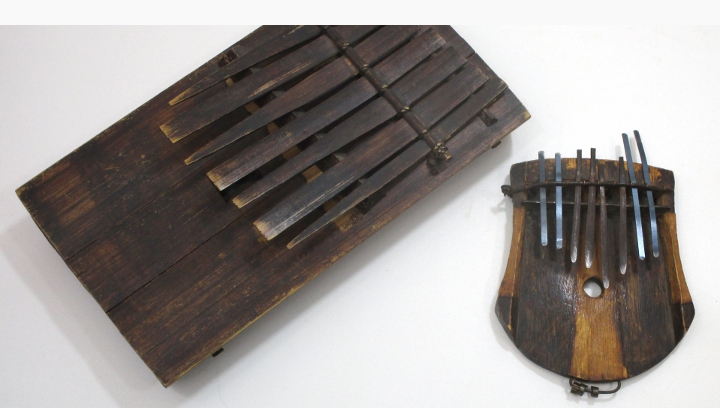 Kalimbas have a rich, varied, and very long history.  Early kalimbas were likely quite different from anything you have seen. Over the years/in my travels in a life focused on playing, writing, and teaching about kalimbas I have picked up two historical instruments by happenstance that to me are preciously full of history and secrets, which both compels and intrigues me. Both instruments were originally separately acquired in Africa in the 1950s… that much I know. Their stories, heritage, and sound constitute an important piece of the “genetics” of the kalimba, and I suspect that you may be interested in learning a little more about them too.

In the absence of concrete knowledge about the bamboo kalimba, it seems possible to me that it did not have a well-developed tradition such as the mbira dzavadzimu has. It seems that the tuning is more ephemeral as well, and that the tuning and music played on this instrument may have been less well-rooted in a tradition held by a community and more of an individual preference situation. (I do not know of any specific information about the tuning or tradition of the bamboo kalimba. If anyone has specific information about how this instrument was tuned or played, I would be very happy to hear about it!)

This bamboo kalimba found its way to me via the Tucson UNICEF (the United Nations Children’s Fund) store in 2009.  Someone had collected several kalimbas (and other cultural artifacts that I did not see) from Africa in the early 1950s, and the collection had recently been donated to the UNICEF store. Most of the kalimbas in that group were unplayable and physically a mess. Nobody could make heads or tails out of them, and they called me in to help.

I sat with each kalimba for about 20 or 30 minutes, prayed over the instrument, and listened deeply to what it “wanted” to be tuned to. As I worked, perhaps I was imposing what I myself wanted each kalimba to be tuned to. Or I could have been seeing something essential about the instruments. Anyway, by the time I was done with each instrument, it was playing pretty well. I was not just tuning, but also re-tensioning the tines, fixing buzzes, and scooting tines around to make them more evenly distributed for easier playing.

And each time I finished a kalimba and put it down, a customer would pick it up and take it to the register to pay for it. I saw this story repeat five times, with each kalimba going to a new home.

I was moving on to the last kalimba – this bamboo kalimba – when the manager of the store came over to me, remarked how well I had done, then asked “Why don’t you take this one home with you, as a token of appreciation for your work in rehabilitating those kalimbas?” Of course, I said YES, and the next tuneup was just for me. And the tuning that the bamboo kalimba ended up with was essentially the same as the one it had when I started my work. I just refined it a bit and gave it perfect 5th intervals (which are present in other traditional kalimba tunings). In the archived article (link at bottom) you can read a much richer and more complete story about the old bamboo kalimba and that whole experience.

My conception of what may have been played on ancient bamboo kalimbas can be heard below.

Listen to the Bamboo Kalimba

We have significantly more historical evidence for my little 8-note karimba. The first documented mention of any kalimba was by the Portuguese Dominican missionary Father Joao Dos Santos in (present day) Mozambique, from his account in 1586. He describes an eight-note instrument that he called the “ambira” – which could be this one, or could be thousands of other possible tunings.

The first instance of a western scholar notating a kalimba song in staff notation was in a 1950 academic paper by A.M. Jones, “The Kalimba of the Lala Tribe of Northern Rhodesia.” There, Jones documents the tuning of an 8-note instrument the Lala people used to play in the 1930s, before they went and added two extra notes. Interestingly, everyone in the Lala tribe in 1950 had 10 notes on their instruments, but all the old songs they played used only the original eight notes!

As I mentioned, my 8-note kalimba was collected in Africa right around 1950, by someone who brought it back from Africa and gifted it to my (late) friend Earl Stutzman, who passed it along to me in 2007. I initially assumed it was a “touristy” model, but Christian Carver, Director of African Musical Instruments in South Africa, confirms that tourist kalimbas weren’t really “a thing” in 1950, and that this was a real player’s kalimba. It was missing four tines (they were lost when the kids in his music class destroyed the instrument!) and I replaced them with thin spring steel. I should note that the original four tines, the ones that were on the instrument when it came to me nine years ago, are still tuned today exactly as they were when they came to me – which was the same as the four central notes of the theoretical 8-note “kalimba core.”  This told me that I was on the right track to tune this instrument as the “kalimba core.” I explain more about this in the next paragraph.

The eight notes of this kalimba, tuned as they are, represent the same notes that Andrew Tracey calls the “kalimba core” and the “original mbira.” His thesis is that these notes were the core notes that were gradually added onto to create larger instruments in the ancient civilizations of the great Zambezi Valley in Africa, including the 24-Note mbira dzavadzimu and the 15-Note and 17-Note karimbas. Indeed, essentially every traditional song that I know for the 17-note karimbas has one or more starting variations that require just these eight notes, indicating to me that this set of notes is very probably much older than the full 15- or 17-note instruments.

I am very familiar with the type of two-phrase music that is played on these karimbas, that I believe are descendants of the primitive 8-note, and while the music I recorded is not any particular traditional song, it fits with the tradition of songs often played on similar instruments

Listen to the 8-Note Karimba

So much for scholarly theories. When it comes down to it, we don’t really know how things happened or how they sounded through the evolution of modern lamellaphones in Africa, and we can’t prove the theories, either. But I guess I just want to believe in the world that we have constructed to explain things, and I really love to imagine I can figure it out just by thinking and being open and sensitive. And I do have two real kalimbas from c. 1950, and they mean something.

But I should know better – every time I think I know what African mbira music is all about, something new pops into my field, and my understanding gets blown apart.  It is a very rich tradition, and while it may be OK to pretend something so that you can hear what the instrument sounds like, I need to be willing to let go of anything I think I know about the instrument whenever any new little bits of truth fall into my lap.

Mark Holdaway has been playing kalimba for over 30 years. He invented his kalimba tablature in 2004, and has been writing books and instructional materials for kalimba ever since. His business, Kalimba Magic, is based on the simple proposition that the kalimba is a real musical instrument capable of greatness. Mark's kalimba books are a down payment on this proposition.
PrevPreviousA Download and Book for the Hokema B11 Kalimba
NextPlaying “When I’m Gone” (the “Cups” song) on C Alto KalimbaNext