Doug is a studio percussionist in NYC, and the kalimba is in his bag 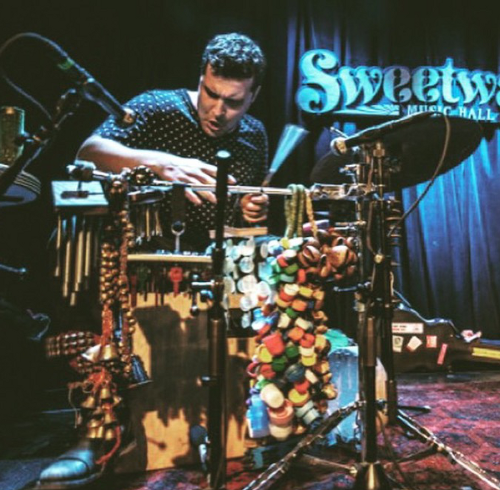 Hi! I’m Doug Fitch, and I have been playing kalimba for about five years. I work as a studio musician in New York City. I’m a percussionist, and one of the special things I bring to the table is the kalimba, and specifically I like Hugh Tracey kalimbas the best.  I’ve found there is just nothing else like them out there. I own several, and have given them as gifts to friends and family.

I’ll be sharing here some of what I’ve learned about playing, recording, and amplifying the kalimba.  The music you are hearing as you read this is a bit of what I do with the Hugh Tracey kalimba.

When they are introduced to the kalimba, people tend to respond in a couple of very different ways. They either perceive them as toys, or they have a very deep-rooted appreciation for the kalimba. In my experience, these amazing little instruments have a unique texture and aesthetic to them.

I use kalimbas in a variety of contemporary music styles, primarily in the studio but on the stage as well. It’s important to remember the place where the kalimba comes from. While kalimbas were played all over Africa, I primarily think of the Shona culture of southern Africa where the kalimba has been played for centuries.

I’ve studied traditional music in Cuba, Guinea (in West Africa), Jamaica, Haiti, and Brazil, and I bring that ethnic experience with me when I play. In all the places I’ve been, they love funk and hip hop and all sorts of modern music. But their appreciation is mostly for the new, which makes it important for us to bring in some perspective and to draw inspiration from the old. That is one of the ways I love to use the kalimba – as an ancient voice layered on top of these new music grooves.

Recording the kalimbas: I’ve found that using a good condenser such as an AKG 414 or AKG 3000, or cardioid microphone such as the AT 4041 captures the sound of kalimbas quite a bit better than using the 1/4 inch input. A good microphone does a good job picking up both the tine sound and the “wah” sound you get from the kalimba when you cover the central sound hole with your thumbs. I don’t record with the electronic pickup and 1/4 inch jack, because it basically picks up the vibration of the wood body and not the air vibrations that make the beautiful “wah wah” sound.

Playing the kalimbas live: I do use the 1/4 inch input and pickup when I play live. The pickup captures the sound of the tines pretty well, but you lose part of the voice of the instrument – that resonant chorus of overtones from the box and the “wah”. You would think that using a mic would be the answer, but I’ve found that trying to mic a kalimba live presents problems to most rooms and most sound engineers. Especially when playing with an entire band, I find that using the 1/4 inch input and pickup works the best.

I’ve sampled kalimba for Sound Design drum packs (collections of sounds) which are distributed online to hip hop music producers. The sound of these Hugh Tracey kalimbas is very much an ear grabber for people looking at these sound packs. I use Ableton Live (a software music sequencer and digital audio workstation) and have found that simple audio effects like reversing a kalimba loop takes the kalimba to a whole other realm and space. You can really hear the attack and the way your chord progression works when reversing your sample or loop. There is an ocean of other audio design that you can apply to these instruments simply because they already produce such a beautiful natural sound. The kalimba is one of my favorite sounds in the world, right up there with upright bass. And it is so very much a healing sound, as the Shona have always said.

Mark Holdaway has been playing kalimba for over 30 years. He invented his kalimba tablature in 2004, and has been writing books and instructional materials for kalimba ever since. His business, Kalimba Magic, is based on the simple proposition that the kalimba is a real musical instrument capable of greatness. Mark's kalimba books are a down payment on this proposition.
PrevPreviousNew Tip Series for Three Exotic Pentatonic Tunings
NextA Fantastic Instructional Download for the SansulaNext