Home > Blog > Item > The “Clocks” riff from Coldplay, on Karimba and Alto

The “Clocks” riff from Coldplay, on Karimba and Alto

Click the link at bottom to hear Coldplay’s “Clocks”

An ostinato is a motif or phrase that persistently repeats in the same musical voice.  Almost everybody knows the piano ostinato that provides the foundation for Coldplay’s compelling song “Clocks,” written a decade ago.  Evocative and haunting, this song seemingly brings to life a dream world.  (Click on the link below this post to hear it.)  While I’ve enjoyed this song since it came out, it never occurred to me to play it on kalimba until recently at a music therapy conference.  One of the attendees started playing “Clocks” on ukelele, and I realized she was playing it in D mixolydian mode, which has the same notes as the key of G major. This is also the same key in which a lot of Hugh Tracey kalimbas are tuned.  I ran and got my Alto kalimba and immediately jumped in.

Would you like to learn how to play the riff to “Clocks” on the kalimba?  We have tablature for both African karimba and Alto kalimba.

The riff/ostinato in “Clocks” provides us the chance to learn about inverted chords.  An inverted chord is simply a chord that has been rearranged; and rather than having the “1” in the bass, it typically has the 3 or the 5.  The “Clocks” riff is made entirely of arpeggiated, inverted chords, making it a great introduction to inversion of chords.  A post that discusses the subject in depth is in the works, but this one provides a first look at inverted chords.

A chord is created when you play two, three, or more notes at the same time; you are playing an arpeggio when you play the notes of the chord, one after the other.  The notes on a kalimba will sustain long after they are played, so when you play an arpeggiated chord, all of its individual notes will sustain and will be heard together as a unified chord.  Pleasing and beautiful.  Playing the arpeggiated inverted chords of the “Clocks” riff demonstrates the power of using these techniques together. 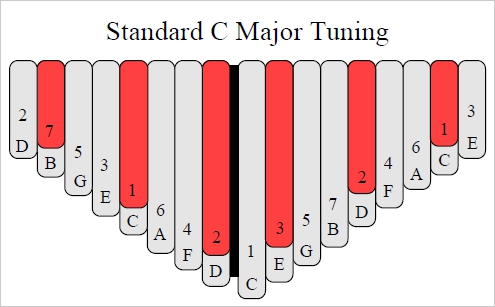 The standard tuning on the 17-Note kalimba in C is… C Major! And there are so many things you can do in this standard C major tuning. In fact, the four instructional downloads and one book that are written for the 17-Note kalimba in C all assume you are in the standard C tuning. However, this article is about what you can do in some other tunings. The C Major tuning is presented here as a reference for the other tunings. 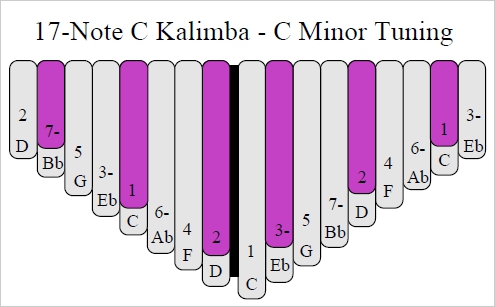 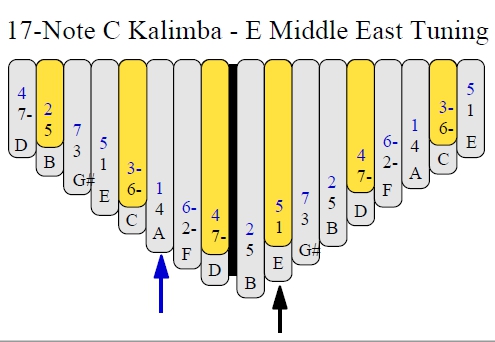 The first 15 seconds of this music emphasize E as the root, and have a very Middle-Eastern sound. At 15 seconds, the music shifts to emphasize A as the root, and we have a classical harmonic minor scale, great for Spanish music. The music goes back and forth between these two modes… which is the main push and pull of this kalimba tuning. 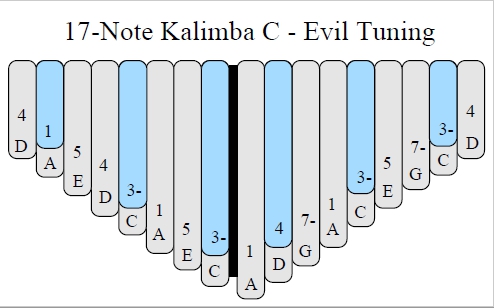 This is my guess as to what Maurice White’s tuning was. Maurice White, founder and leader of Earth, Wind & Fire until 1996, turned millions of people on to the kalimba. (“Evil” was one of the songs on which he famously played kalimba.) His idiosyncratic minor pentatonic tuning resonates with an African vibe.

Mark Holdaway has been playing kalimba for over 30 years. He invented his kalimba tablature in 2004, and has been writing books and instructional materials for kalimba ever since. His business, Kalimba Magic, is based on the simple proposition that the kalimba is a real musical instrument capable of greatness. Mark's kalimba books are a down payment on this proposition.
PrevPreviousB. Michael Williams
NextIntroduction to KarimbaNext