Chords on the 17-Note Kalimba in C

And how to play melodies above them. This recipe works for any diatonic kalimba with alternating note layout 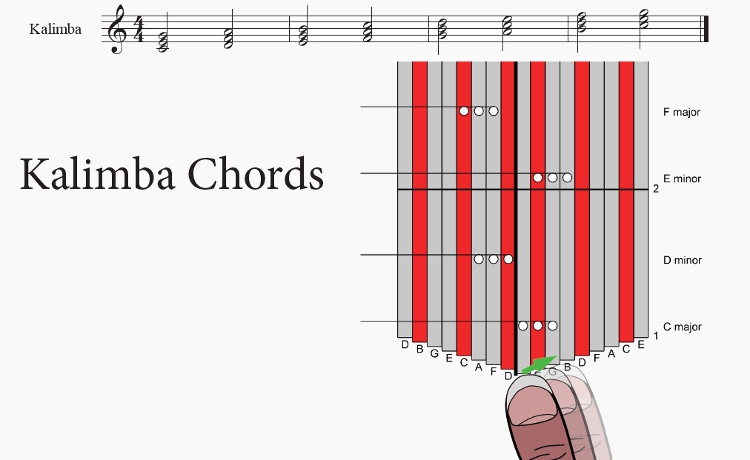 In an article I wrote earlier this month, I said that every non-traditional kalimba in the world owes its existence to Hugh Tracey. (Of course, they also owe their existence to the hundreds and thousands of people in Africa who pioneered and played the karimba, mbira and related instruments over the last 1000 years.) But most non-traditional kalimbas are copies of the Hugh Tracey kalimba’s design and note arrangement.

That note arrangement makes it particularly easy to create melodies high up on the instrument, and simultaneously to produce good chords low down on the instrument that perfectly accompany that high melody. Would you like to learn more?

First, where are the high notes, and where are the low notes? If you are familiar with the kalimba, you know intuitively – the low notes are in the middle, and the high notes are on both the far left and the far right. At least for tines with identical thickness and steel properties, longer tines make lower notes and shorter tines make higher notes. 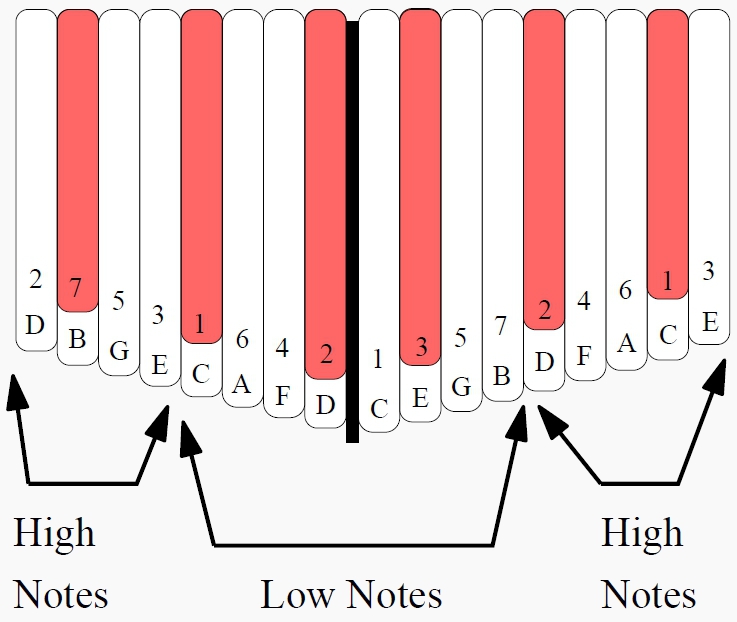 The true beauty of Hugh Tracey’s kalimba design is that when a melody note is played high up with one thumb, then usually the chord that works with that melody note will be low down on the other side. This is related to what I call “Mark’s Rule of Thumb” – if you play two notes that are straight across from each other, they will sound bad… but if you play one note lower and the other note higher, they will sound pleasing.

This lesson will leverage that basic information to help you play chords and melodies together on kalimba. While this sounds like an advanced technique, if you just focus on the basic thumb motions and ignore which notes you are playing, it is actually very straightforward. 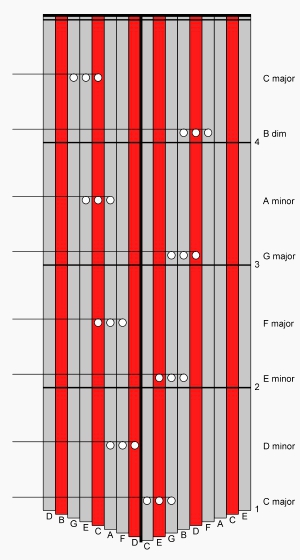 A triad is a certain type of chord that is common in music, typically made of the 1, 3, and 5 of a certain scale. In order to play a triad, play any three adjacent notes on the same side of the kalimba. To do this, you will probably want to use the glissando technique (see links at the bottom of this blog post).

(Hey, does the low C belong to the left side or the right side? Do you see the black vertical line in the center of the accompanying tablature, between low C and D? That is an invisible line separating left tines from right tines. Thus, the C belongs to the right thumb.)

Try this – pick out three adjacent tines at random (be sure not to cross the central black line). Pluck them, one at a time, or strum them all at once with a glissando. What chord is it? Find the lowest note (longest, most central tine) of the three you played, and then find the name of that note. That note is the note name of the chord. Is it major, minor or diminished? You may be able to tell from the sound, and if you really need to know, look it up in the accompanying tablature image. And remember it!

Do you see what this music is doing? It is systematically playing every triad on the kalimba (in standard inversions anyway – if that was Greek to you, don’t worry). We start with the C chord, then the D, then E, then F. You will note some triads are major and some are minor. You cannot control whether something is major or minor – this tuning automatically makes only C major, not ever C minor. And all the D triads will be D minor. You just take what the kalimba gives you, which fortunately is a good set of chords

At the very end of the tablature, we come back to the C major chord, on the mid-upper left side. The starting C major chord was on the lower right side. You can make each one of these triad chords in the upper octave – the upper D minor chord will start on the middle of the right side, on D, then the two outer adjacent tines, F and A. 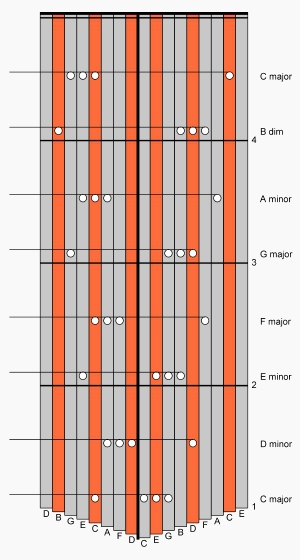 Before you try to play this tablature, start on your middle C – the painted tine in the middle of the left-hand side. Jump across to the next note up in the scale, D, which is also painted. Then back (left) to the E, and alternate your way up to the high C, the last painted tine on the far right. We are going to add that scale to the chords we previous played.

This music works beautifully, because the note we added at the top is actually the same as the note each chord is named after. To the first chord, C major, we added the C note an octave higher. This is key: the high note we add is always on the opposite side to the chord.

It will take you a while to play this smoothly – like days or weeks or even months of practice. But that time is totally worth it, because this basic motion will open up a world of possibilities to you. Take it as slowly as you want. Slow is better than fast on chords anyway. You’ll soon see why.

One other thing: look at the motion your thumbs make, both shifting to the right, then both shifting to the left, as you move from one chord to the other. That is the Windshield Wiper Method, described in detail in the article “Mark’s Rule of Thumb.” When you think of this more in terms of the motions your thumbs need to accomplish than what notes you are playing, you will begin to achieve freedom in your playing.

Oh, and I called those high notes “melody notes” – but they are actually notes upon which a melody is about to be built, and that part is coming up next.

Look at measure 1 – I make the low triad chord, C major, on the right side, and add the higher C on the left side. That C is a melody note. And the melody? It is three high notes, C, D, and E, played left, right, left. Note that only the first melody note needs to be on the side opposite to the chord; after that you are not constrained as to what notes you play.

Once you understand the pattern in measure 1, take a look at measure 2. This is a mirror image – the chord is played on the left, the melody starts on the right side D, and goes right, left, right.
After you get the first two measures, you should be able to play the rest easily, repeating the same basic patterns, just edging out one tine further as you step your way up in the scale.

As melodies go, this one is a bit simplistic. But it gives you the idea of how to combine chords and melodies.

Often in music, a full chord is played at the start of a measure, and as it sustains, a melody is played, just as in the previous example. In the tablature here, I have specified the chord, and one of the melody notes (the top note of the chord). Your job is to make something fancy happen, probably using the upper notes of the kalimba, on the two beats that have rests in the tablature.

Those two pairs of squiggly lines on beats 2 and 3 of each measure are quarter rests. If you don’t know about rests, see our contemporaneous article on rests in tablature. For starters, pick one melody note to play in place of each rest – so it will be a close sister to the previous tablature. But as you get more steady with the chords, try to mix it up. For example, go ahead and change the top note of the chord (ie, the first melody note in a measure) to a higher note, farther out on the same side as wherever you are right now. And instead of just two more melody notes, put in more notes before you change to the next chord. Above all, experiment. Run around and discover. Play things you don’t like. It’s OK, you’ll never find cool and amazing new thing without making mistakes. But when you play the cool thing that you love (after you’re done appreciating the beauty that came to you) do your best to try to understand and repeat what you’ve been playing, so that you might be able to play it again in the future.

This is where my job ends and you go off on your own – best to you your journey!

Mark Holdaway has been playing kalimba for over 30 years. He invented his kalimba tablature in 2004, and has been writing books and instructional materials for kalimba ever since. His business, Kalimba Magic, is based on the simple proposition that the kalimba is a real musical instrument capable of greatness. Mark's kalimba books are a down payment on this proposition.
PrevPreviousInstructional Resources for the Alto Kalimba
NextMark’s Rule of ThumbNext