African mbira music is tremendously compelling to me, and I had been working to translate it onto the more accessible Hugh Tracey Alto and Treble kalimbas for months but feeling quite frustrated.  I could not find my intuitive wisdom with this traditional music. When it came, the realization was like the sun coming up after a long dark night, and suddenly shining bright on the mountains. The issue was… intervals!  (You can hear two wonderful mbira songs right now by clicking in Related Articles below, on “Listen to Mark…” or the YouTube song below it.)

Basically, the distance between any two notes is called an interval. Most western music is based on small intervals, such as the 2nd and 3rd, while much of African music is based on larger intervals, such as the 8th (octave) and the 5th. I had just realized that my western training needed to get out of the way just a little bit, so a different way of seeing music could bloom. In this post we discuss intervals and give some simple exercises to help you get a solid footing with these building blocks of all music, and especially of mbira music.

The smallest interval in music is the 2nd, which is the distance between two adjacent notes in a scale. The 3rd interval is the distance you get if you play one note and skip over the next note in the scale, and play the third – such as from C to E, which skips D in between. A 5th is the interval you get if you play one note, skip over three, and then play the fifth note, for example, C and G. And an octave is an interval of eight notes, the first and eighth of which are the same note, going from, for example, middle C, through D, E, F, G, A, B, up to C again.

Playing 2nd intervals on kalimba is particularly nice because they are played on alternating sides, which means your thumbs can play them very quickly. Thirds are also a delight;  as they are played on adjacent tines, it is very simple and easy to play them, even though it’s not as fast as playing 2nds. Thirds can sound especially nice because they make arpeggios if you play 3 or more of them. This makes a chord, played one note at a time. 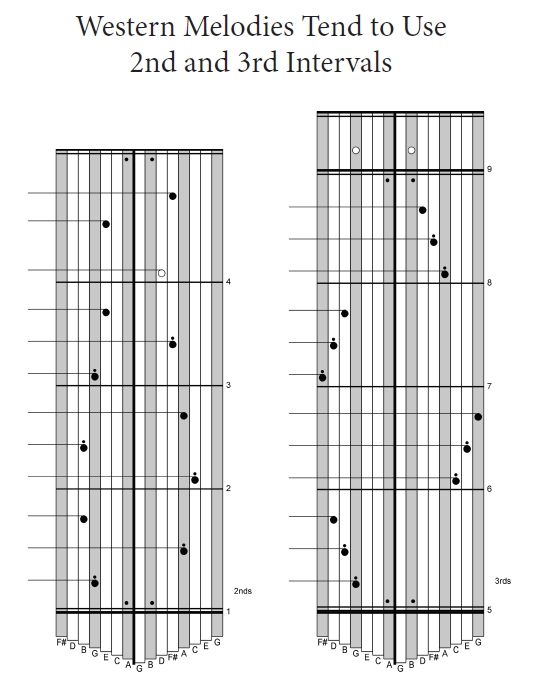 The two most common intervals in western melodies, the “second” and the “third”, are illustrated in the tablature above.  To follow along, you can count the notes along with the recorded music.  Don’t forget to repeat each section!
Listen to this music

I have put in my 10,000 hours of practice and have become expert at playing western melodies, mainly consisting of 2nds and 3rds, on the kalimba. They come easily and naturally to me, and I have a good intuition with these sorts of melodies. I can play by ear, and I can improvise. However I’ve always been confounded by the mbira music that I tried to translate to kalimba.

Lately, though, I have finally stopped being embarrassed that traditional African mbira music comes so slowly to me on Alto kalimba, because I figured out that this music is built on unfamiliar octave and fifth intervals.  I had already known this about African music, but I hadn’t really “gotten”  it at a gut level and my music showed it. Now that I finally get it, I can stand tall again.

So, now I want to get good at playing mbira-style music on the Alto and Treble kalimbas, and I am practicing my octave and 5th intervals. In order for you to be able to take on a world of wonderful traditional music that you can play on kalimba,  I recommend that you, too, bone up on your 5ths and octaves.  And, amazingly, there just happen to be some nice exercises for the Alto kalimba below. 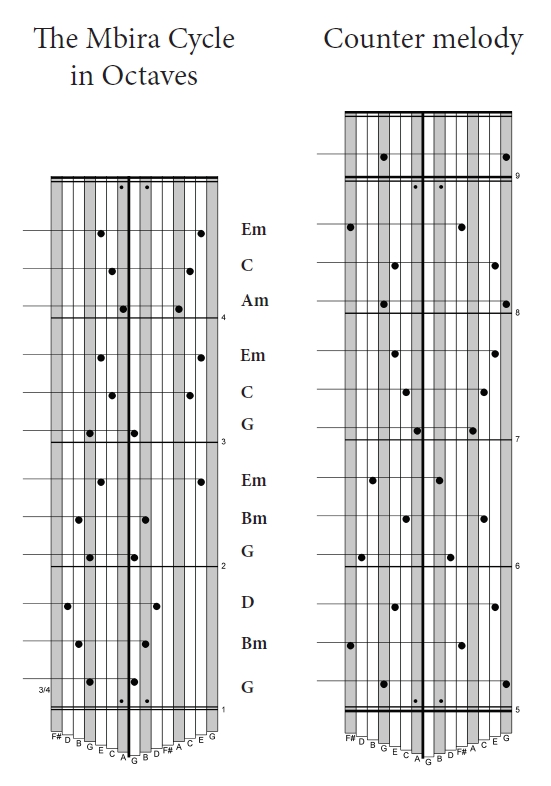 Left: this is the most basic representation of the mbira cycle we introduced last time – but instead of full chords on each pulse, it is just the root note of the chord plus another note an octave higher. Right: this is the sort of step-wise melody that might be found in advanced mbira variations, but many of the notes are doubled an octave apart.
Listen to this music

The tablature column on the right is an interesting case: just as in the left column, the pairs of notes played simultaneously are octave intervals.  However, the top note of each octave interval first descends slowly in 2nds, and then ascends in 3rds – so while it is a good example of African music, it is also not that far from western music either. 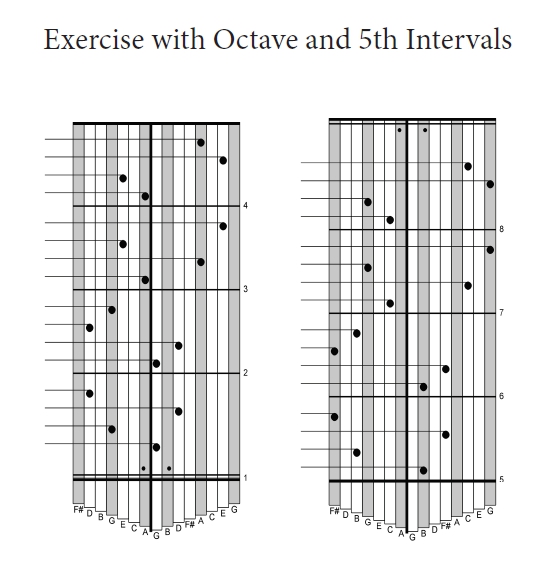 While this exercise does not have any octaves or 5ths played together, the interval between adjacent notes is often an octave or a 5th.
Listen to this music

While the previous exercise (Mbira Cycle in Octaves, etc.) used notes always doubled in octaves, the above exercise plays the notes just one at a time.  In each four-note measure, all the notes are related to the first note as either an octave or a 5th.

Now that you’ve seen what octaves and 5ths look like in the tablature, and heard the exercises played, you can hear the music that you heard when you first opened this post – a tune in traditional African mbira style being played on the Alto kalimba that is based on octave and 5th intervals. CLICK HERE TO PLAY IT AGAIN

You already are aware of my assertion that the octave and the 5th are foundational to African music.  In many ways they are vital in western music as well.  No matter what the source of the music you wish to play, being familiar and well-practiced with playing octaves and fifths will strongly augment all of your musical endeavors.

Here is a rewarding homework assignment before we bring you more Alto exercises in the next newsletter: if the weather’s fine, take your kalimba out for a walk (or any place where you won’t be distracted and can play around), experiment with other riffs that utilize the octave interval, and make an effort to remember how those riffs go.  Practice them, become adept with them, and you’ll be playing your own home-grown, octave-based music.

Mark Holdaway has been playing kalimba for over 30 years. He invented his kalimba tablature in 2004, and has been writing books and instructional materials for kalimba ever since. His business, Kalimba Magic, is based on the simple proposition that the kalimba is a real musical instrument capable of greatness. Mark's kalimba books are a down payment on this proposition.
PrevPreviousAfroharp Book Now Available
NextThe Magical Music BoxNext