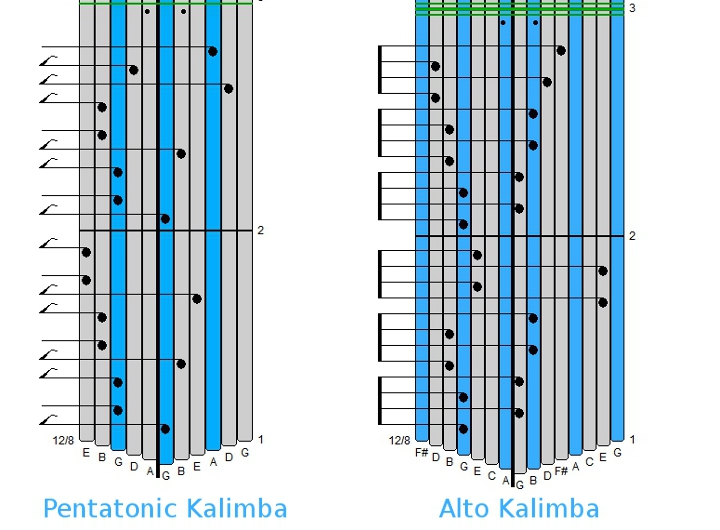 How do you play two kalimbas together?  There is no particular tradition for doing that, but there is a deep, wide, and wild tradition of playing two mbira dzavadzimu together – one plays the kushaura part (the leading part) and the other plays the kutsinhira part (the following part).  Often the same high notes are played in the two parts, but the kutsinhira part’s high notes will echo the kushaura part’s high notes.  If a particular high note is repeated in the first part, the second part will often insert the same high note in between the repeated notes of the first part – that is, one part plays in the gaps of the other.  The resulting music sounds like you are trilling that note twice as fast as a single player should be able to play it.

So, the next logical step is to apply this method of joining two mbiras together to the Hugh Tracey kalimbas .

This post is closely related to the blog post “Playing Kushaura and Kutsinhira Parts on Mbira”. You can learn all about what traditional kushaura and kutsinhira parts are, and how they work on the mbira dzavadzimu, if you

(It may be tricky to keep those two strange “K” words straight. A simple tip for remembering which is which is to alphabetize the words!  “Kushaura” comes first alphabetically, and it is the leading musical part. “Kutsinhira” comes second and it is the following part.)

The song that is playing right now is derived from the traditional “Pfumvu Paruzevha”, on Thomas Mapfumo’s CD “Live at El Rey”. (The Pentatonic kalimba is playing in your left speaker and the Alto kalimba is in the right speaker.) I highly recommend this CD. There was no guitar in the band on that evening in 1999, but of course there were two mbira players, a kit drummer, and an exceptional bass player who seemingly played lead guitar lines, hidden mbira lines, and low bass all at the same time.  The mbira melody lines in “Pfumvu” are not reproduced in the music playing now, but this music is still true to the chord structure and gestalt of the traditional song.  In particular, some of the elements of the kushaura and kutsinhira parts from “Pfumvu” are reproduced in this piece.

In this piece it may be hard to determine which kalimba is playing in the lead position and which the secondary. In my own opinion, and even though the Alto starts on the high note and the Pentatonic follows with its own high note in echo, the Pentatonic’s part seems to be more structural, and the Alto kalimba’s part dances around a bit more. This suggests that the Pentatonic is playing the kushaura role to me. The line between leading role and following role may be blurred here, but the two parts do that dance together of pushing and pulling and locking together, in essentially the same way that kushaura and kutsinhira parts work in traditional mbira music.

I am so looking forward to trying the Pentatonic/Alto pairing on more songs, and to using this traditional mbira practice on different kalimba pairings.  I can’t wait to sink my teeth into an Alto / Treble pairing, letting the Treble go off on the higher kutsinhira lines against the Alto’s more structural kushaura part.

Every now and then I get a little self-conscious about this – I am a grown man who gets really excited about the subtle differences between tinkly little notes being played by these homely little instruments.  But of course, I also write it for you, and if you are reading these words, I can bet you are excited by these tiny wonders too!  Blessings!  This is a long a fruitful road we are on.

Mark Holdaway has been playing kalimba for over 30 years. He invented his kalimba tablature in 2004, and has been writing books and instructional materials for kalimba ever since. His business, Kalimba Magic, is based on the simple proposition that the kalimba is a real musical instrument capable of greatness. Mark's kalimba books are a down payment on this proposition.
PrevPreviousTIP: Playing “Mahororo” on the African Karimba – 3 / 5
NextTIP: Alto Kalimba Riff #1Next