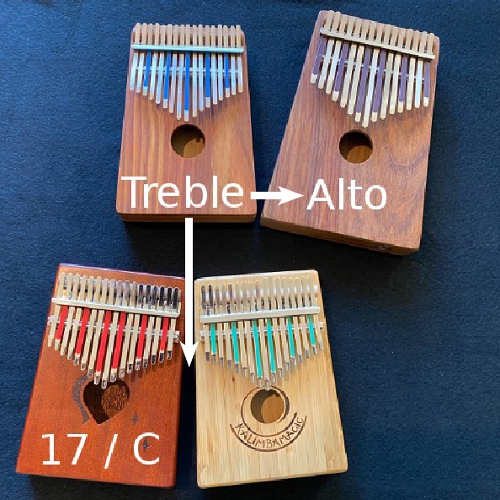 What is the difference between Alto Kalimba, Treble Kalimba, 17-Note Kalimba in C?

For starters, the Alto is bigger and lower, the Treble is smaller, and the 17-Note Kalimbas in C are the same size as the Treble kalimba. In the beginning, there were many traditional types of kalimba, all over Africa. These inspired Hugh Tracey to create the Treble Kalimba, based on several design elements of various traditional instruments. In 1954, Hugh Tracey started selling the 17-Note Treble Kalimba commercially. These kalimbas set the standard for what a “kalimba” is – a modern version of the traditional African instrument. When I asked Hugh’s son, Paul Tracey about it in 2005, he told me that the larger, lower 15-Note Alto kalimba was an