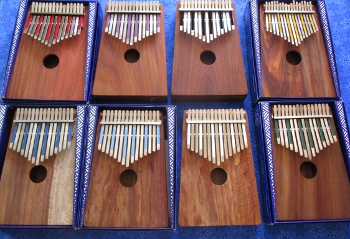 What Colors Are Available for Painting Kalimba Tines?

a profusion of possible colors! A Box Lotus and a Regular Lotus Karimba Come with me for a moment, to stand behind Hugh Tracey, circa 1952. For years before he began selling his kalimbas, Dr. Tracey worked at perfecting a new kalimba invention, creating over 100 prototypes, experimenting with various design features. When he finally settled on what worked and sounded best for his Treble kalimba, he had really accomplished a tremendous feat. Hugh Tracey kalimbas still look almost exactly as they did in 1954, when he started selling them to the world, and many kalimba makers across the globe copy the Hugh Tracey Treble design. Hugh Tracey’s work is the standard by