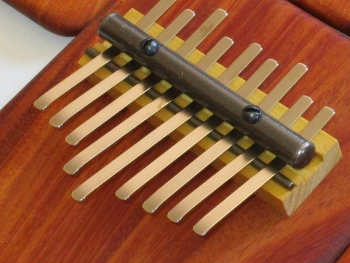 Songs for the Student Karimba: Borrowing From a Karimba Song

This old, old instrument lives on and can play lots of 17-Note karimba music 9-Note Student Karimbas The “student karimba” is my own invention – or rather, it is my re-invention.  I came up with the name, but Andrew Tracey calls it the “kalimba core” as well as the “original mbira”.  I like to call it “the kalimba that time left behind.” While this little instrument is far from popular these days, it was mentioned in the first scholarly article on the kalimba written in 1950 by missionary A.M. Jones.  I feel this simple instrument’s pattern is truly important because of where it stands in the history of all thumb 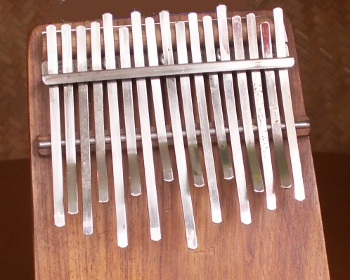 Syncopation, variations, tweaks and trills The Lotus-tuned karimba was created by the inventive recording artist SaReGaMa.  He once received an out-of-tune African-tuned karimba as a gift.  Rather than simply tuning it up, SaReGaMa instead used this as an opportunity to invent several of his own tunings and create music that worked with each tuning.  The Lotus tuning is the one he used for a song that he improvised one night in an effort to get his baby daughter, Lotus, to go to sleep.  He made a video of that improvisation,  known to the world as “Kalimba Solo for Lotus.” Available at the Kalimba Magic Shop, we have two instructional downloads