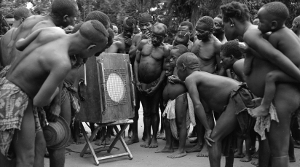 The man who created the modern kalimba movement also worked to preserve traditional African music Search the ILAM Music Archive of Hugh Tracey’s Recordings While Hugh Tracey is best known for the Hugh Tracey kalimba, I believe his most important work was the assemblage of 35,000 field recordings he made through the 1930s, ’40s, and ’50s of traditional music across sub-Saharan Africa. These recordings captured music across Africa just before much of the traditional music was eclipsed and even erased by modern European influences such as the western scale, choral church music, and western popular music, which were propagated by radio and recordings.  Today, Tracey’s historical recordings are alive and