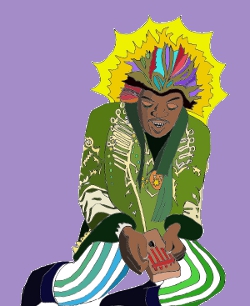 It was good enough for Jimi Not many know that Jimi Hendrix was an excellent kalimba player Did Jimi Hendrix really play kalimba?  Well, no, Jimi Hendrix didn’t do anything with the kalimba as far as I know.  I’m sure one was put into his hands though, as the kalimba was exploding in popularity at the same time Jimi Hendrix was. This art work is derived from the famous photograph of Jimi kneeling in front of his guitar as he is poised to light it on fire for the first time in public.  In that photo, Jimi is looking down at his hands, and his hands look like he is