How to Play the Chromatic Kalimba

Do you want a real challenge?  Do you want a kalimba that will allow you to play essentially any sort of melody or harmony?  Then the Chromatic Kalimba is your instrument. The Chromatic is really two kalimbas, with one row of tines on each side of its resonating box or board. It has the "white notes" on the front and the "black notes" on the back. 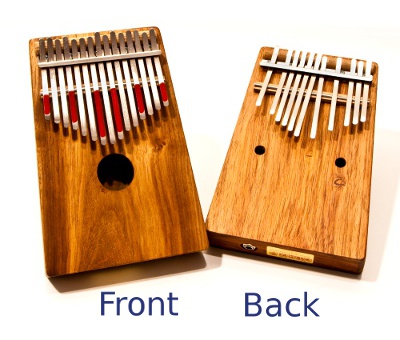 One major issue with most kalimbas is that they are tuned to the diatonic scale ("Do Re Mi Fa So La Ti Do") and so they are missing the chromatic notes, which are the sharps and flats, or accidentals (the note between "Do" and "Re" for instance). The simplified diatonic scale helps make the kalimba an easier instrument to learn, but makes it difficult or impossible to play complex songs with key changes or notes beyond the diatonic scale. Scott Joplin's The Entertainer, for instance.

You will see other ways to lay out the notes on a chromatic kalimba, and while the Hugh Tracey Chromatic Kalimba has its challenges, I personally am captivated by this design, and people all over the world are becoming good at this instrument. It is true to the kalimba concept - the way of holding your mind and body such that right and left thumbs bounce off of each other to synthesize a unique sort of music.

The Chromatic Kalimba looks just like the Hugh Tracey Alto kalimba on the front... but the notes that are usually missing from the Alto Kalimba (F, Bb, Eb, Ab, and Db) are present on the back. It is challenging to play the notes on the back side with your fingers when you cannot see them, but after many hours of serious work with the instrument, you will have every note over a two octave range at your fingertips.

The front side of the Chromatic is just like the diatonic Alto Kalimba, and this means that you can use any of the Alto books for instruction on playing these 15 of 26 total notes.

Several people are contributing great video of their progress on the Hugh Tracey Chromatic Kalimba.

Here are a few simple adjustments that can be made to the chromatic kalimbas to make them much more playable. 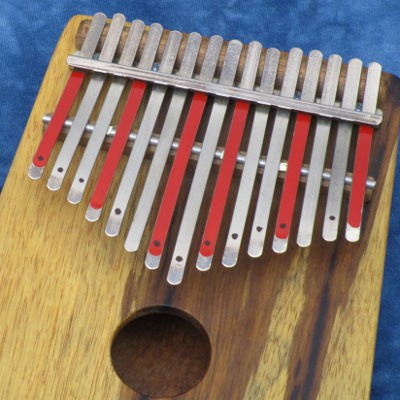 I Put Dots on Tines With Flats Behind Them

As discussed in a video above, some of the tines on the front do not have flats on the back, but most do. I use a Sharpie marker to make a little dot on the front-side tines that do have flats immediately behind them on the back side. Pictured is my personal Chromatic Kalimba, complete with dots indicating the flats. We put the dots on every Chromatic Kalimba we send out. 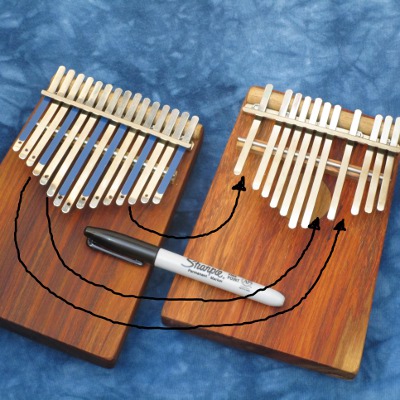 Looking at these Celeste Chromatics, you can see the correspondence of the front-side tines without dots and the gaps in the back-side chromatic tines. As the dots are made with a Sharpie marker, you can remove them with alcohol wipes. When the dots wear off from playing, you can just get your own Sharpie marker and put them back on. If you are uncertain which tines to put the dots on, you can either figure it out from the back side tines directly, or you could look at the chromatic tuning diagram.

In this photo, the tines on the front of the Chromatic Kalimba are all parallel, but the tines on the back side are splayed apart. Why? The flat notes on the back are "right below" their unflatted counterparts on the front, and if you have really big hands, you might look at A on the front, imagine where the A flat is on the back right behind the front A, and nail it. When I used to try that, I always missed... that is, until I scooted the back left tines a few mm further to the left, and the back right tines a few mm further to the right. I have moved the back-side tines outward until they feel just right, and then when I guess where they are I find I get them almost every time.

We don't move the back-side tines apart when we send the Chromatic Kalimbas out, just in case you have big hands or you don't want them that way. You are encouraged to play around with the kalimba and shift the tines until they feel good to you. By the way, when you slide those tines over, you will probably excite a buzz or two, but you have all the tools you need to fix those buzzes.

Music Written for the Chromatic Kalimba

There is a growing body of music written for the Chromatic kalimba that is available for free from the Kalimba Magic website. These are provided in chromatic tablature, which shows the front-side tines in the center, and the back-side tines as shaded tines on the far left and right. This is not so easy to read, but try this: print out the tablature, and every instance where a back side note is required - say an Eb - you could make another mark on the E tine, which reminds you to play the Eb right behind the E.

A Book for the Chromatic Kalimba?

Mark Holdaway of Kalimba Magic (yours truly) has worked on a Chromatic Kalimba book at various times in the past. Someday it will be finished, but not anytime soon. In the meantime, I invite you to download this poorly configured draft book for the Chromatic Kalimba. It has some useful insights into how to play this instrument, and some music that gently adds the chromatic notes. Another useful thing you can do is to get an Alto book to instruct you on playing the front side of the Chromatic Kalimba.

The Hugh Tracey Box Chromatic Kalimba is our best selling chromatic, and it is the one that I own personally. The box is the same size as the Alto kalimba's box. If you have small hands or short fingers, this one will be difficult to reach around to play the chromatic notes on the back.

By the way, every Chromatic Kalimba we sell comes with an electronic pickup. Our thinking is that these instruments are all going to pretty serious players, so we are doing them the favor of sending them instruments already supplied with the capability of being amplified at a performance. 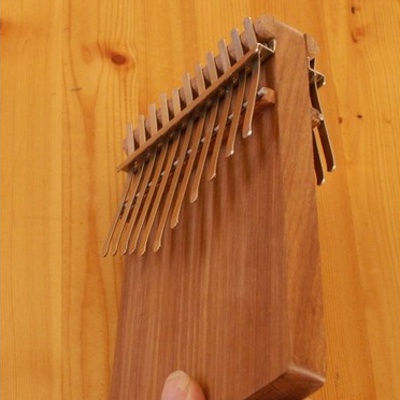 The Hugh Tracey Celeste (board-mounted) Chromatic Kalimba has the same hardware as the box chromatic, but it is mounted on a smaller, narrower board. This smaller body is easier for people with small hands or fingers to hold and play. Automatically comes with pickup. The disadvantages: it is not as loud as the box chromatic (when unamplified), and you can't do the "Wah Wah" effect. 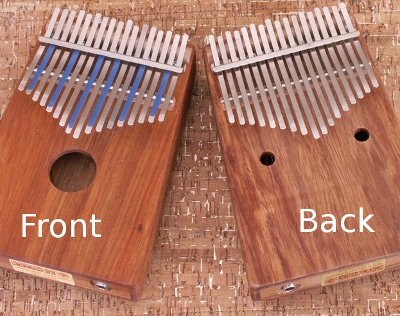 The Hugh Tracey Treble (box) Chromatic Kalimba is mounted on a treble kalimba box, and has 17 notes on the front in the key of C (with C in the bass note). The Treble Chromatic has different notes than the Alto and is tuned a fourth higher, but the tines are painted just like the Alto tines. The C Chromatic Treble reads the G Alto Chromatic tablature. The notes will be different, but the finger and thumb patterns will be identical - except for the top two notes on the C Chromatic which will not be included in the Alto Chromatic tablature.

On the back are the chromatic notes. You may choose from two different "back options": (a) 17 notes, half a step below the front notes (E and B notes will be redundant on front and back), or (b) with 13 notes, just the flats, with gaps where the E and B notes are in the first option. The full 17 note back is more challenging than the 13 note back model as the gaps on the 13 make it easier to navigate. And either version is more challenging than the Alto Chromatic because their tines are smaller and closer together than the Alto's.

If you have any questions, feel free to contact us via the email form, or speak directly to Mark Holdaway at 520-488-7641.