8. The future of the kalimba

With its ancient roots and its seemingly infinite new age possibilities, the kalimba continues to amaze the world. The future of this simple, traditional African instrument is a bright one. 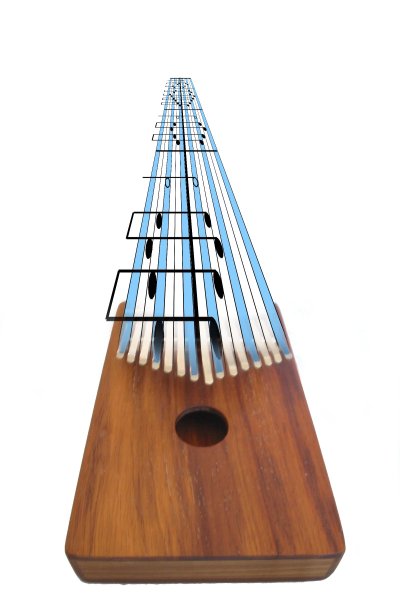 By 2005, the kalimba had already become my favorite instrument (and I play many). I had been playing Hugh Tracey kalimbas for 20 years. Whenever I could find them in music stores, I would buy one or two to keep on hand for a gift or for a lost-kalimba emergency (these little instruments do seem to disappear from time to time). Hugh Tracey kalimbas were a part of me. I had also recently debuted my website, which was created to promote my musical career and which especially featured my kalimba playing. At this time I had just made the decision that my long time career as a radio astronomer was going to end. The Tucson office of the National Radio Astronomy Observatory was shutting down, and to continue with them I would have to move far away, and family obligations prevented this kind of move.

In 2005 I received an email from the director of AMI, Christian Carver, who had been in that position since 1999. He had discovered me through my new website. He talked to me about African Musical Instruments and how the company had been doing well enough with profits from their business of building marimbas for both traditional African music and for western symphonic music, but that they were considering giving up on kalimba production because of a combination of distribution problems and hardships with competition from cheaper, inferior kalimbas.

After over 50 years on the market, the Hugh Tracey kalimba was still among the best kalimbas available. Many kalimbas that you find in music stores or on eBay were made by cheap labor in Pakistan or Indonesia – usually poorly constructed, untuneable, with dangerously sharp, stiff, buzzy tines, and from places with no historic connection to the instruments. There are some high quality producers in the world who have found markets for their instruments - Colorado Soundscapes (USA), Hokema (Germany), Hands on Drums (Germany), Thomas Bothe (Germany), Goshen (USA), and Catania (USA) come to mind. In spite of the fact that people all over the world now send me their amazing kalimba innovations, almost all of the kalimbas that I use for performance are still Hugh Tracey kalimbas - they are that good.

When I realized that Christian Carver’s message meant that AMI might cease production of Hugh Tracey kalimbas, my first reaction was panic – where would I ever get another? And where would the rest of the world get them? What a terrible loss if Hugh Tracey kalimbas were to disappear! I could not imagine a world without them. I vowed to do everything in my power to help bring the Hugh Tracey kalimba back to its rightful place of kalimba prominence, and so in 2005 I began my business, Kalimba Magic, to bring the instrument to the world and to show people just how much fun it is to make great music on the kalimba. I began a distributor relationship with AMI, buying their kalimbas wholesale and marketing them, and after that I was on my own.

Up until then, very little educational material had been available for the kalimba. I realized that the first thing I needed to do to remedy this and to help my business at the same time, was to start writing instructional books. Serendipitously, less than a year before I began to sell kalimbas, I had invented an ingenious form of tablature for teaching purposes that would work for any kalimba - a map of the kalimba tines, stretched out from the bottom to the top of the the page. The correct tines to play are indicated by musical note symbols placed on the tines' columns as you read up the page. Experience with reading music helps, but even 6-year-olds with no prior musical experience can also do fine with this notation. This tablature tremendously facilitates teaching and sharing kalimba music. Each different kalimba note layout and tuning would require a separate book, so I had my work cut out for me! 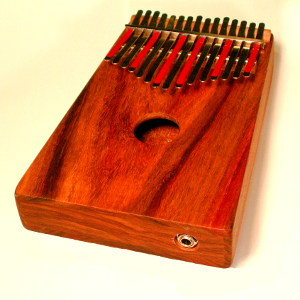 Electronic Pickups and Diversification of the Kalimba Catalog

Shortly after I started Kalimba Magic, AMI made available an optional, built-in electric pickup and jack feature on their kalimbas that has become very popular. These pickups are inexpensive and they are fairly high quality devices. They let anyone pretend to be Maurice White jamming out on the electric kalimba! I began to offer these amplifiable kalimbas immediately and today more than half of all the AMI kalimbas I sell have built-in pickups. 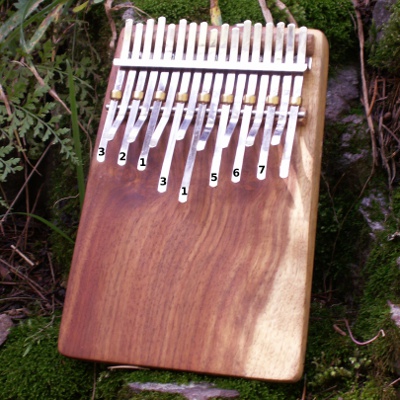 In addition to the original Treble and Alto kalimba models, AMI now makes a refined version of an instrument called the karimba (yes, with an "r" in the middle), a traditional instrument from Zimbabwe with a truly ancient note layout. The notes on the lower row constitute Andrew Tracey's "kalimba core", and may be the oldest of all existing designs and tunings. All other instruments in southern Africa share these notes as part of their basic design.

AMI continues to introduce other pioneering kalimba models to the public, and Kalimba Magic is committed to providing top level kalimba instructional materials that support these new Hugh Tracey kalimbas.

While I am personally dedicated to promoting Hugh Tracey kalimbas - I have been playing and greatly appreciating them for 30 years - I am not prejudiced against other high quality kalimbas. If I come across a kalimba that I love to play, usually I find a way to bring that into our catalog and make it available to you. And yes, I provide some instructional materials for those new kalimbas as well. 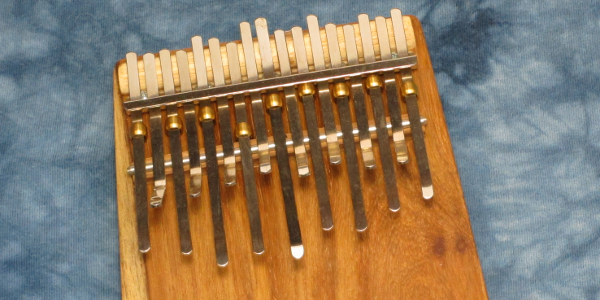 Kalimba Magic is moving forward into the world of ground-breaking kalimba tunings. Through our own work and through collaborations with the worldwide community of kalimba players, we have introduced dozens of new kalimbas in specialty tunings. These kalimba innovations are mostly built on existing models rearranged with new note layouts, such as the SaReGaMa Lotus-tuned Karimba, shown in the photo above, available only from Kalimba Magic. Consider Kalimba Magic to be a "kalimba think tank”; we provide both an established selection of traditional kalimbas plus a variety of tested and approved new and experimental innovations. 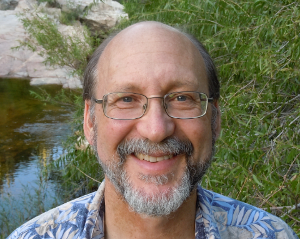 Music has always been very important to me, and for the last 10 years, sharing the kalimba with the world has been my life. Over those 10 years, I have brought many kalimbas to the market, have worked on improving the setup of existing kalimbas, educated the world about how to keep a kalimba in tune, shared the history of these fascinating instruments, and taught the world to play hundreds of kalimba songs through my books and downloads. We have simple, inexpensive kalimbas that work for the newbie or the child, and we have highly capable kalimbas on which you could perform with a rock band or symphony orchestra. I get several emails every month from people who had thought that the kalimba was just a toy, until they watched one of the many Kalimba Magic YouTube videos. The kalimba is a highly adaptable instrument on which real music most certainly can be made.

If you believe in my mission, jump on board and discover for yourself the joy and magic so easily found in the kalimba. I invite you to purchase a kalimba and a book, or two, or three. You may find yourself in love for a lifetime.