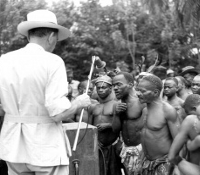 Hugh Tracey was an English ethnomusicologist who traveled widely in rural Africa in the first half of the 20th century. This man’s life’s work turned out to be the reason that kalimbas are known and loved by so many in the world today. 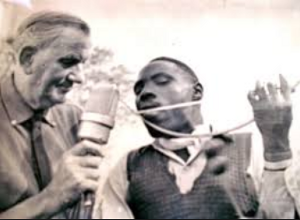 Early in his time in Africa, Hugh Tracey fell deeply in love with traditional African music. Over the course of his 5 decades in Africa, he came to especially love the music of a group of instruments called “thumb pianos”, modern-day descendants of an ancient family of African musical instruments. These thumb pianos had a multitude of shapes, tunings, styles of playing, and names, depending on where in Africa they were found. Tracey began to manufacture these instruments and decided to use the name “kalimba”, one of the names of the traditional instruments that he thought westerners would be able to say and remember. In the late 1950’s he started a company called AMI, or African Musical Instruments. AMI began international shipping of kalimbas tuned to the western "do-re-mi..." scale. The Hugh Tracey kalimba was first marketed in America by the toy company Creative Playthings of Princeton, NJ, in the early 1960’s.

The world was first exposed to the magic of kalimba music when Hugh Tracey's sons Paul and Andrew toured with, and played kalimba in, the hit musical review Wait a Minim! between 1962 and 1968. Hugh Tracey himself also toured the world, giving speaking engagements on African music and the kalimba. In 1973, the American band Earth, Wind and Fire scored a hit with the song Kalimba Story, and the kalimba's popularity surged.

Since the 1970s, there have been hundreds of kalimba makers, some creating instrument designs that push the capabilities and tonal colorings of the instrument. The diversity of designs gives us simple 5-note instruments and complex instruments with over 100 tines. As each kalimba tine can be independently tuned, there is practically an infinite number of possible tunings.

Since 2005, Kalimba Magic has stood as a clearinghouse of kalimba information and innovation. The kalimba is experiencing a new surge of world-wide popularity. We have shipped kalimbas and books to every state in the USA and to over 70 countries. Kalimba Magic has collected and transcribed dozens of traditional African songs for the kalimba, and we have written dozens of books and instructional downloads on how to play the different kalimbas. We have invented or collected and shared over 100 different tunings for the kalimba, each with different capabilities or emotional nuance. By considering the kalimba to be a real musical instrument capable of real music, we are transforming the way this diminutive but exquisite instrument is thought of and used across the world today.