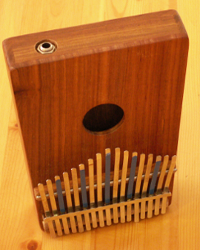 How do the pickups work on the Hugh Tracey kalimbas?

Each Hugh Tracey Kalimba is available without or with a built-in pickup, which would add $12-$22 to the price of the instrument. The Chromatic kalimbas all come with pickups.

The pickups are contact microphones mounted on the inside of the box under the bridge (or in a similar location on the solid body kalimbas). The 1/4 inch jack allows you to plug into an amplifier or effects processor with a guitar chord. For recording, I prefer the sound you get with a microphone, as the mike will catch all the air sounds - (ie, wah-wah and vibrato). The pick-ups mainly capture the surface vibrations of the wood, and about 20% of the wah-wah sound. If you're going to use an effects processor, or if you want to be heard over the band, the pickup is the way to go. The pickup does not influence the straight acoustic sound in any way. For a few bucks extra, I think it is definitely worth it.

Do the pickups affect the acoustic sound of the kalimba?

When properly installed, the pickups have no impact on the acoustic sound of a board-mounted or celeste kalimba. A few times, I have seen kalimbas with loose pickups which rattled. You can fix this by tightening the nut on the pickup jack, or possibly by using a bit of glue. Box mounted kalimbas with pickups have a subtle effect. You make a "wah-wah" sound by covering and uncovering the sound holes. The pickup jack is one more sound whole. SO, the "depth" of the "wah wah" sound is slightly diminished when you have a pickup - this is like a 10-15% effect.

Here is another thing I have seen a few times - the jack has a long thin piece of metal that reaches around the guitar cord plug and touches the tip of it, and that piece of metal can sometimes vibrate like a kalimba tine. Or almost like a kalimba tine. What happens is one particular note on the kalimba will excite that arm to vibrate, and it will buzz. So if you have a crazy buzz that cannot be fixed by any of the regular methods, stick your finger inside the sound hole and touch (ie, deaden the vibrations of) the metal arm near the jack and see if that doesn't fix the problem. If so, try fiddling with it, bending it a bit, or changing its orientation.

First, try a different guitar chord. Next, try a different amp, at someone else's house with better electricity (ungrounded circuits in your house could result in a ground hum). Still not working? Give me a call. If it has failed in the first year of use, I will replace it.
Copyright © 2020 Kalimba Magic. All Rights Reserved.